Are you looking into the global remittance market in 2021? Well then, you’re in the right place. We’ve researched, audited, and organized the up-to-date remittance statistics for 2021.

Here’s a quick breakdown of what we’re going to cover:

International money  transfers are commonly referred to as “remittances.” Remittance is essentially the transfer of money sent from one party to another, often overseas.

‘Remittance’ comes from the word ‘remit’, which means ‘to send back’.

Remittances can be personal money transfers or business payments. The two main factors that are driving the increase in the remittance market are the increase in individuals living and working abroad and the increase in globally connected businesses.

As technology makes our world feel smaller, more people are taking advantage of the opportunity to work abroad. Sending remittances home to their families allows them to continue supporting their loved ones while they are away.

Along the same lines, the ability for international trade has increased due to technology and use of the Internet. This allows businesses to connect with customers, suppliers, and employees from around the world, resulting in increased business remittance payments.

There are many factors affecting the growth of the global money transfer market such as the basic need for safe and secure international money transfers. It is estimated that by 2026 the global remittance market is going to reach an astonishing USD 930 billion.

The remittance market is expected to continue growing as the global market is fueled by decreased costs, an increase in cross-border transactions, and an increase in the availability of mobile-based payment channels.

A lack of awareness of digital remittance has slowed the growth of remittance to some extent.  But the increased use of technology, the Internet, and the availability of mobile devices are expected to continue driving the increase of the remittance industry. 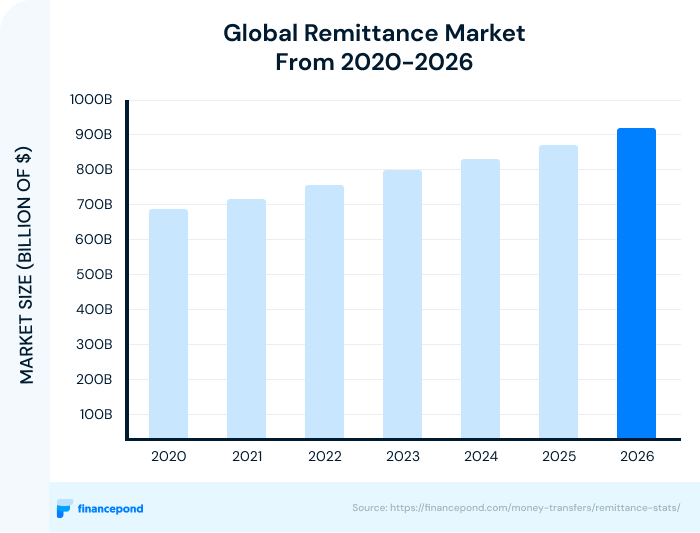 Here’s a table of remittance growth since 2018 and the projected market growth to 2026:

This increase in international transactions and digital-based payments strongly increases the adoption of new players that are willing to join the global remittance market.

The main players in the global remittance market are:

Banks take the highest share of the global remittance market, with 51% of funds expected to be channeled by banks in 2021.  Money Transfer Operators are expected to channel 26% of remittances in 2021, while others make up the remaining 23%.

Check out the table below, we broke down the main global remittance channels from 2018 – 2026:

The personal use of money transfers accounted for the majority of global revenue in 2020 according to PRNewswire. And with more people worldwide live outside of their birth countries than ever before, it is assumed that a large amount of money will continue to be remitted.

The end-users, that is, the person or entity who receives the remittances, are grouped into two categories. The two main end-users are:

The majority of remittances go towards personal use. 70% of the global remittance market is expected to benefit personal use in 2021.

We organized the monetary breakdown of global remittance by end-user from 2018 – 2026:

Workers and migrant remittances are money transfers made by migrants residing in a foreign country to their families in their home countries. These are also known as cross-border money transfers.

According to the World Bank, as of 2019, there were 7.5 billion people in the world. It is estimated that one in nine people are supported by remittances sent home by migrant workers.

Migrant workers typically send home only 15% of what they earn. On average, this amounts to $200 to $300 every one to two months. The remaining 85% of earnings stay in the country and are spent, saved, or invested locally.

There are 195 countries in the world. Approximately 70 of these countries rely on remittances for more than 4% of their GDP. These remittances are an imperative source of social and economic growth. 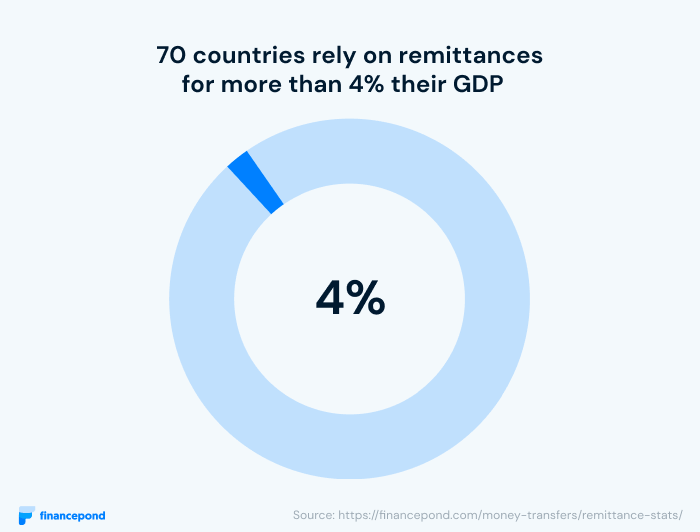 More than 50% of remittance transfers are sent to rural areas. Three-quarters of the world’s food-insecure individuals live in these areas, and the flows of these remittances help them improve their lives and increase resilience.

The accumulated remittances to these areas is projected to reach USD $1 trillion over the next five years! 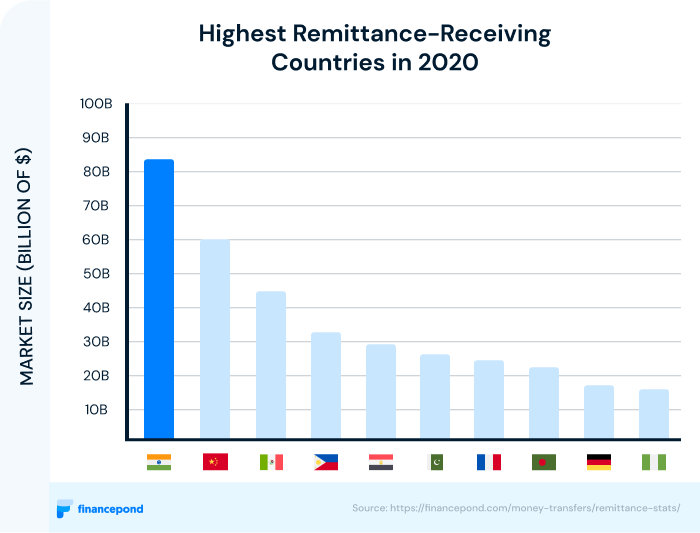 The United States, United Arab Emirates, Saudi Arabia, and Switzerland have been the top remittance sources since before 2015. 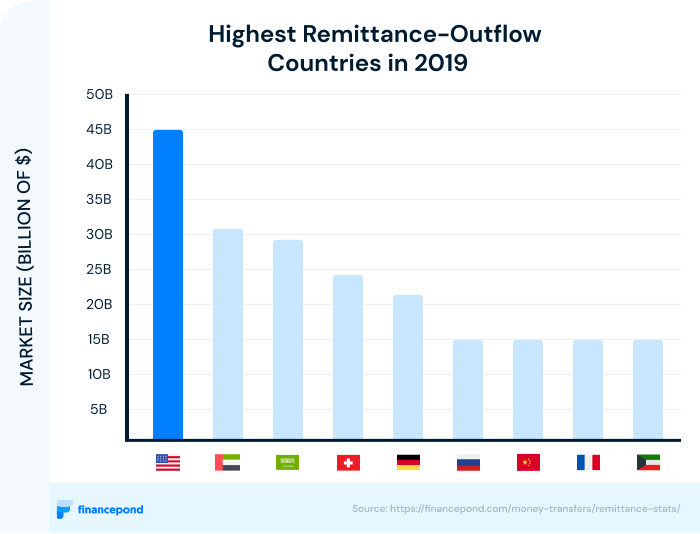 Below is a list of the highest remittance-outflow countries in 2019:

This data is reflective of the increasing importance of remittance receipts on Mexico’s GDP.

The vast majority of remittances (95.6%) received in Mexico come from the United States. 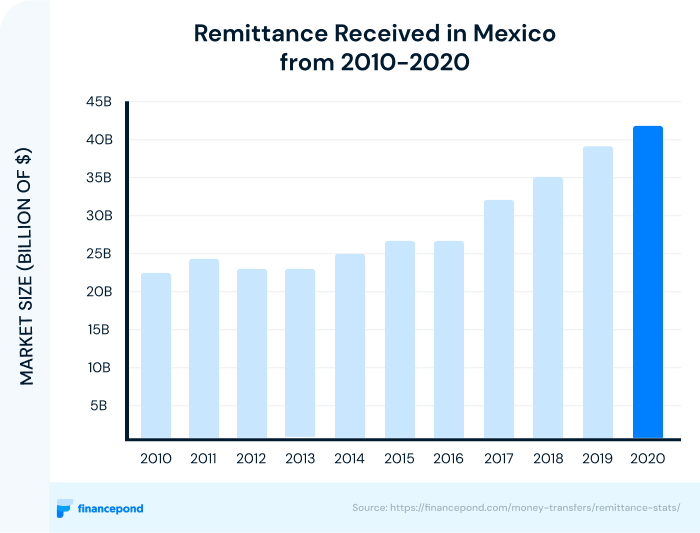 Personal remittances in India are primarily received from the United Arab Emirates, Saudi Arabia, and the United States. Technology providers have worked to make remittances more available to those who don’t have access to a bank account, and now Indian recipients can have stored funds transferred to their email addresses.

In 2014 only 53% of Indians had a bank account; by 2018 this percentage skyrocketed to 80%. This rapid growth, in addition to increased adoption of technology, will encourage the remittance market in India to keep growing.

The growth of remittances received in India over the past decade has been sporadic. Large jumps in 2011 and 2012 were followed by three years of nearly stagnant growth, followed by a sharp dip in 2016.

Since then, the upward trajectory has continued for the most part, although the remittances received in 2019 (USD 83.332 billion)  were nearly equal to those received in 2020 (USD 83.149 billion). 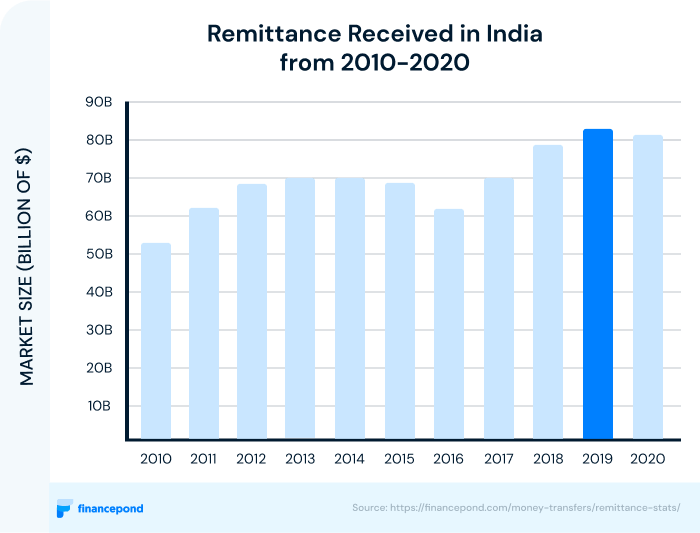 Remittances to India are taxed at 5% due to income tax returns often not being filed on remittance funds.

The top countries sending remittances to the Philippines are Saudi Arabia, United Arab Emirates, and Malaysia.

Personal remittances received were responsible for 9.658% of the Phillippines’ GDP in 2020. Remittances have an enormous impact on the economic growth of this country, and this has been consistently true over the past decade. 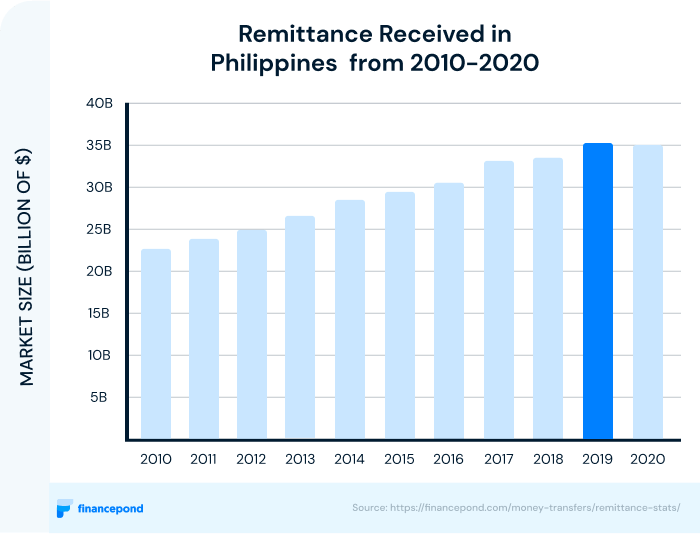 In the Philippines, remittance providers are regulated by the government. Besides banks, people can also use institutions such as pawnshops and money lenders to send and receive remittances.

The second-largest increase was between 2016 (18.856%) and 2017 (20.002%), a net increase of 1.146% in GDP. These high rates underscore the importance of personal remittances on El Salvador’s economy and shows the increasing reliance upon remittances to support the economy. 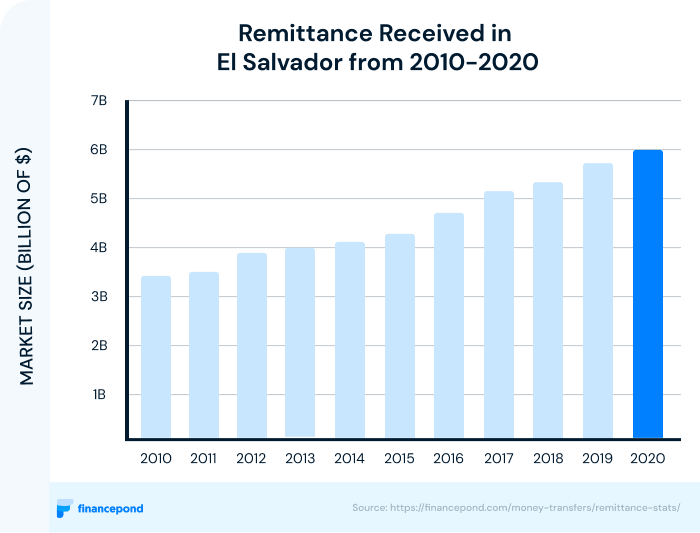 Emigration from Vietnam has continued to increase, with the majority of overseas workers residing in Taiwan, South Korea, Malaysia, and Japan. In 2018, the net migration rate declined by 1.06%, with 142,860 workers emigrating from the country.

All remittances made to Vietnam must be in Vietnam Dong, in accordance with governmental policies. The majority of the Vietnam population prefers to use cash rather than credit cards or electronic money. 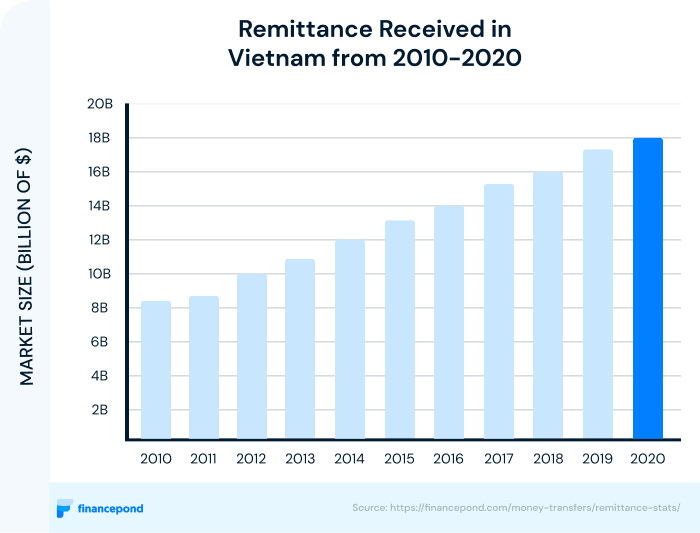 The percent of GDP attributable to personal remittances since has ranged from a high of 7.125% in 2010 to a low of 6.343% in 2020. Remittances are an important part of Vietnam’s economic growth.

The average remittance increase year over year in China from 2010-2020 was 3.93%. While personal remittances increased overall during this period, there were some startling changes which we will discuss below.

Then again China remittances took another nosedive from 2018 to 2019, when personal remittances were USD 18.294 billion (a decrease of nearly 25%).

Since 2010, remittances have remained under 0.3% of China’s GDP, despite the drastic changes in the USD value of remittances. 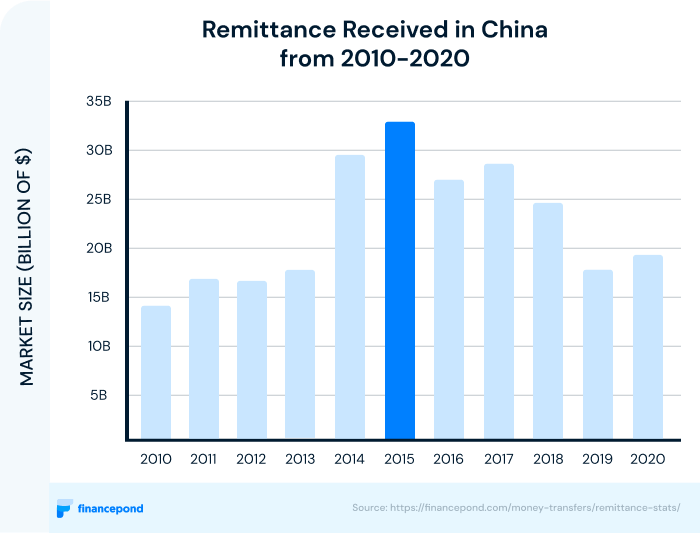 This back-and-forth trend ended in 2018 when there was a sharp increase from the 2017 personal remittance total of USD 6.347 billion to USD 6.651 billion. This increase amounted to a modest 4.8%, but it was a sizable increase in comparison to other years. 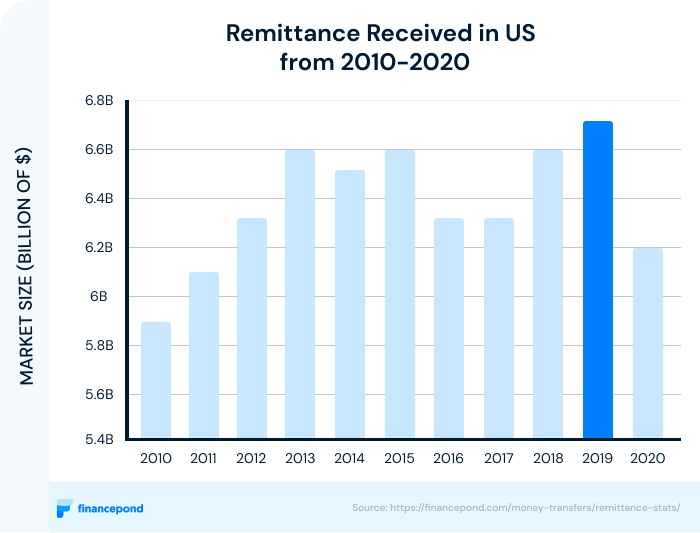 Depending on your nationality, residency, the tax laws of the country you are in, the reason you are receiving international payments, and the sum you are receiving will determine if you are required to pay taxes on your money transfer.

Do I have to Pay Tax on Money Transferred from Overseas?

The straightforward answer is yes, but honestly, it depends.

If you’re a US citizen then you absolutely need to pay tax to the IRS, but only if you pass the IRS limit. If you’re receiving a large transfer from overseas, you should expect to pay taxes especially if the funds are for business purposes.

Generally, you don’t need to pay taxes on gifts of foreign money. However, you still need to report it to the IRS!

And even though you might not have to pay taxes, remember that your funds might still be subject to other fees such as transfer fees.

What is IRS Limit with International Wire Transfers?

The IRS limit with international wire transfers is USD 10,000.

Banks and money transfer operators are required to report international wire transfers that exceed USD 10,000. This requirement is due to the Bank Secrecy Act, and the limit is in place to help avoid money laundering, tax evasion, and other fraudulent activities. Even if you make several smaller transfers that total more than USD 10,000, your account may still be flagged and the amounts reported.

By law, banks must monitor for fraudulent activity and report any suspicious activity. Banks are required to gather information about the person sending and receiving the money as well. You may need information such as the recipient’s name and address, information about their bank and bank account, and the reason for the transfer.

Why do Bank Transfers Take So Long?

Bank transfers typically take between one and five business days. Bank transfers use a network of banks to process payments. Transfers between different accounts at the same bank may happen instantly or only take a day because the money doesn’t have to move to a different institution.